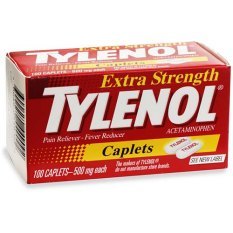 New research suggests acetaminophen (Tylenol) may help individuals overcome non-specific fear and anxiety brought about by thinking about death or the human condition.

According to lead researcher Daniel Randles and colleagues at the University of British Columbia, the new findings suggest that Tylenol may have more profound psychological effects than previously understood.

“Pain exists in many forms, including the distress that people feel when exposed to thoughts of existential uncertainty and death,” says Randles.

“Our study suggests these anxieties may be processed as ‘pain’ by the brain — but Tylenol seems to inhibit the signal telling the brain that something is wrong.”

The study builds on recent American research that found acetaminophen — the generic form of Tylenol — can successfully reduce the non-physical pain of being ostracized from friends.

Prior research has also determined that when the richness, order and meaning in life is threatened — with thoughts of death, for instance — people tend to reassert their basic values as a coping mechanism.

Randles and colleagues speculated that the existentialist suffering we face with thoughts of death might involve similar brain processes. If so, they asked, would it be possible to reduce that suffering with a simple pain medicine?

The researchers had participants take either Tylenol brand acetaminophen or a sugar pill placebo in a double-blind study.

All the participants were then asked to read an arrest report about a prostitute, and to set the amount for bail.

Just as expected, the control group that wrote about dental pain — who weren’t made to feel an existentialist threat — gave relatively low bail amounts, only about $300. They didn’t feel the need to assert their values.

On the other hand, the participants who wrote about their own death and were given a sugar pill gave over $500 for bail — about 40 percent more than the dental pain group, in line with previous studies. They responded to the threat on life’s meaning and order by affirming their basic values, perhaps as a coping mechanism.

But, the participants in this group who took Tylenol were not nearly as harsh in setting bail. These results suggest that their existential suffering was “treated” by the headache drug.

A second study confirmed these results using video clips. People who watched a surreal video by director David Lynch and took the sugar pill judged a group of rioters following a hockey game most harshly, while those who watched the video and took Tylenol were more lenient.

The study demonstrates that existentialist dread is not limited to thinking about death, but might generalize to any scenario that is confusing or surprising — such as an unsettling movie.

“We’re still taken aback that we’ve found that a drug used primarily to alleviate headaches can also make people numb to the worry of thinking about their deaths, or to the uneasiness of watching a surrealist film,” says Randles.

The researchers believe that these studies may have implications for clinical interventions down the road.

“For people who suffer from chronic anxiety, or are overly sensitive to uncertainty, this work may shed some light on what is happening and how their symptoms could be reduced,” Randles concludes.

While the findings suggest that acetaminophen can help to reduce anxiety, the researchers caution that further research – and clinical trials – must occur before acetaminophen should be considered a safe or effective treatment for anxiety.